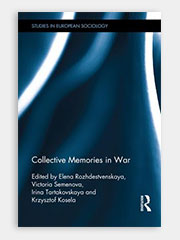 The book is the result of long-term common team  interest towards the topic of social memory. First years that was promoted in cooperation with polish scholars as the problem of collective memory about war and later as an interest towards  memory as social institution: politics of memory, memory in collective identity formation process, local and national memories. This book has following parts and chapters: memoring policy in different countries; historical nextbooks and memory formation; memory sites in city space; collective identity and memory in different local communities; internet and memory; gender specifics of memory. General editing process was fulfilled by Semenova V., Rozhdestvenskaya E., Tartakovskaya I. (Institute of sociology RAS) and K. Kosela (Warsaw university).

Part I: Policy of History and Memory in Different Socio-Cultural Contexts

1.The Politics of History in Poland and Germany,Michał Łuczewski, Paulina Bednarz-Łuczewska, Tomasz Maślanka
2. Collective memory and its Cultural Antecedents in Russia,Michail Chernysh
3. Between Past and Present: The forming of views on history in the Czech Republic, Jiří Šubrt

13. Constructing Masculinity from the War Spirit, Irina Tartakovskaya
14. Body, Memory and Emotions of Male Members of the Army with Direct Experience of War, Alexandrina Vanke