Sorokin P. A. Leaves from a Russian diary. Sociology of the Revolution. 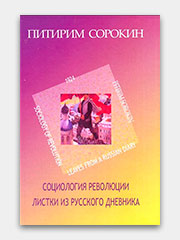 This volume of the collected works of P. A. Sorokin includes the first two books written by him in the United States in 1923-1924. Leaves from the Russian Diary is a book of memoirs covering the period from the beginning of the February Revolution of 1917 to September 1922, when the scientist was expelled from Soviet Russia. The full translation of Leaflets is published in Russia for the first time. The Sociology of the Revolution was written in Russian when P. A. Sorokin was in Czechoslovakia. After moving to America, he translated it into English and published it in 1925. The typescript of the book in Russian lay in the archives (first in Prague, then in Kiev) for more than 80 years before it became available to the Russian reader. The enduring significance of the book lies in the fact that it dealt the first serious blow to the idol of the Revolution, which European humanity worshipped throughout the XIX and XX centuries.