Sorokin P. A. Hunger as a factor: The impact of hunger on people's behavior, social organization and social life 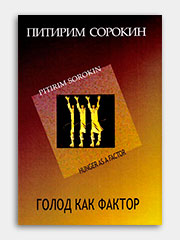 The book Hunger as a factor was written by P. Sorokin in 1921-1922. It was already being prepared for publication when the author was expelled from Soviet Russia. The set was scattered, and the sheets printed by that time were destroyed. Only a few copies of the printed 10 sheets have been preserved in the largest libraries in Russia. After the death of Pitirim Alexandrovich, his widow Elena Petrovna made an abridged translation of the book into English from a set taken out of the country and published it in 1975. In Russia, the book appeared 30 years later. This edition was prepared on the basis of 10 printed sheets of Hunger as a Factor that have been preserved in Russia and a photocopy of the set of other chapters provided by the sociologist's son Sergey Pitirimovich.