Precariat: the emergence of a new class (collective monograph) 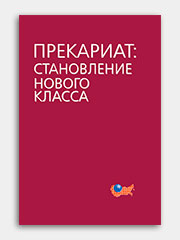 The article discusses the theoretical, methodological foundations of the precariat study. The analysis is given to the existing experi-ence of understanding this phenomenon in Russian and foreign liter-ature. Revealed the reasons for its appearance in the modern histor-ical arena. The initial positions of the preparation of the first special study of the precariat in the Russia are described, the methodological grounds for its implementation are revealed: the definition of the so-cial problem in the sphere of labor relations, the formulation of the hypotheses of the study, the substantiation of the research model, which is associated with the definition of the structure (composition) of the precariat, its representation in various spheres of society. Spe-cial consideration was given to the methodological tools of its study – sampling, survey methods, justification of methods of analysis of em-pirical information. Based on the data of the all-Russian study, the main and special features of the precariat were identified, its place and relationship with other social groups and primarily with the mid-dle classes were shown . A debatable question is discussed – whether the precariat can be called a class and what are its main criteria in this case. Assumptions are made about its role in the course of fundamen-tal social changes in the economy and politics, the social consequences of its continued existence. An attempt was made to determine its role in defending its own interests, as well as the prospects for its further development and functioning.This monograph was prepared with the support of the Russian Sci-ence Foundation No. 18-18-00024 “Preсariat: a new phenomenon in the socio-economic structure of society”